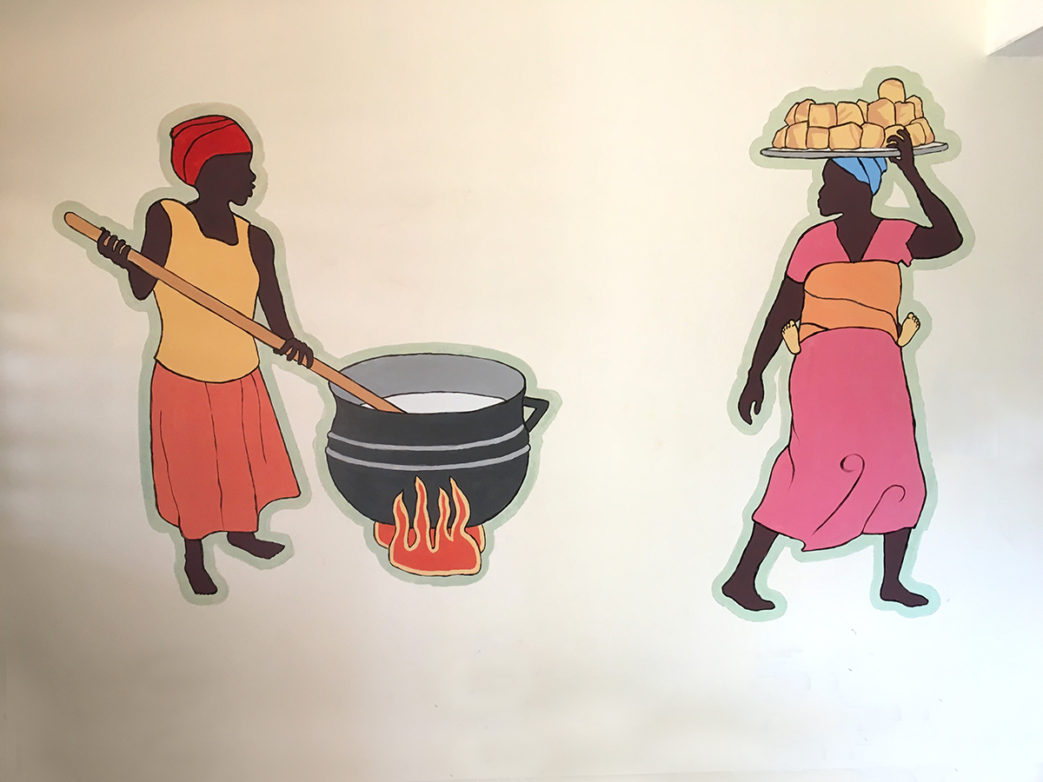 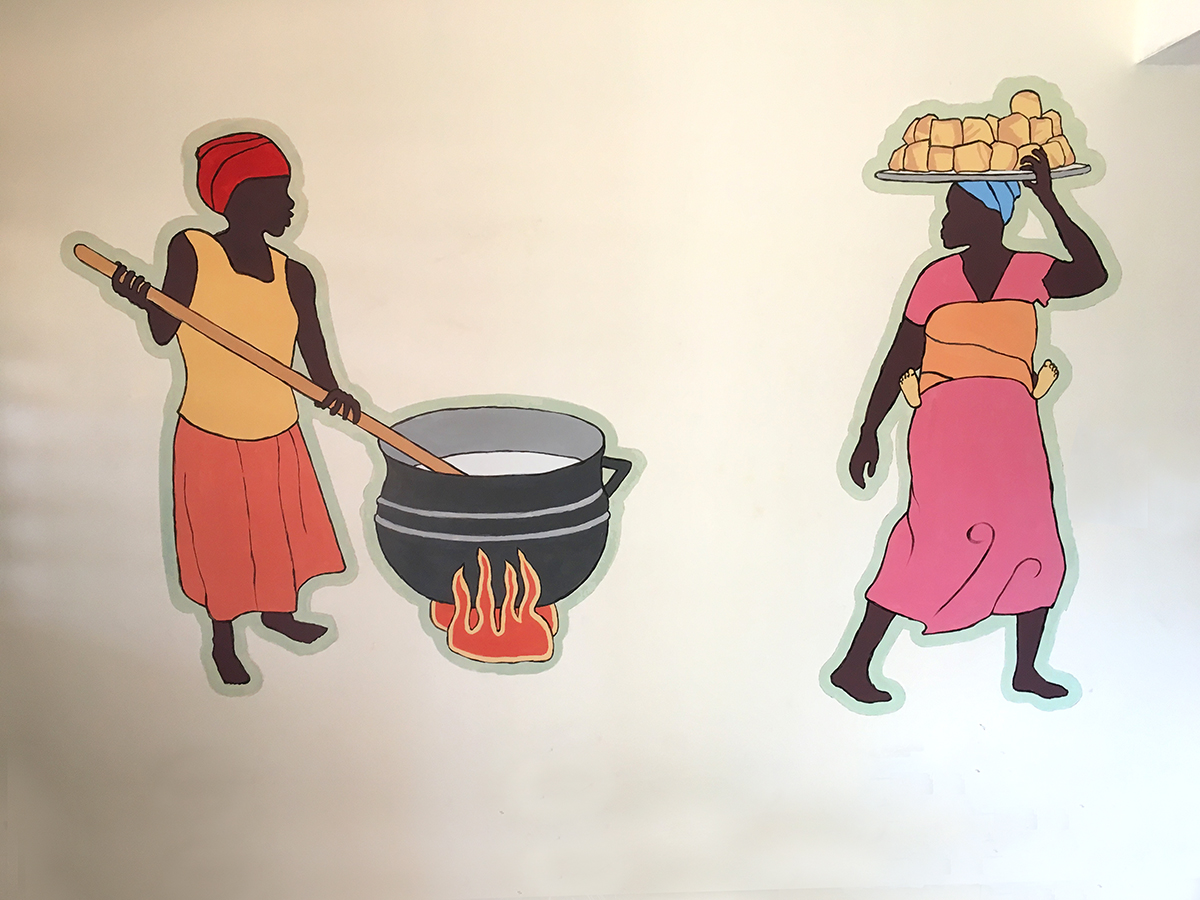 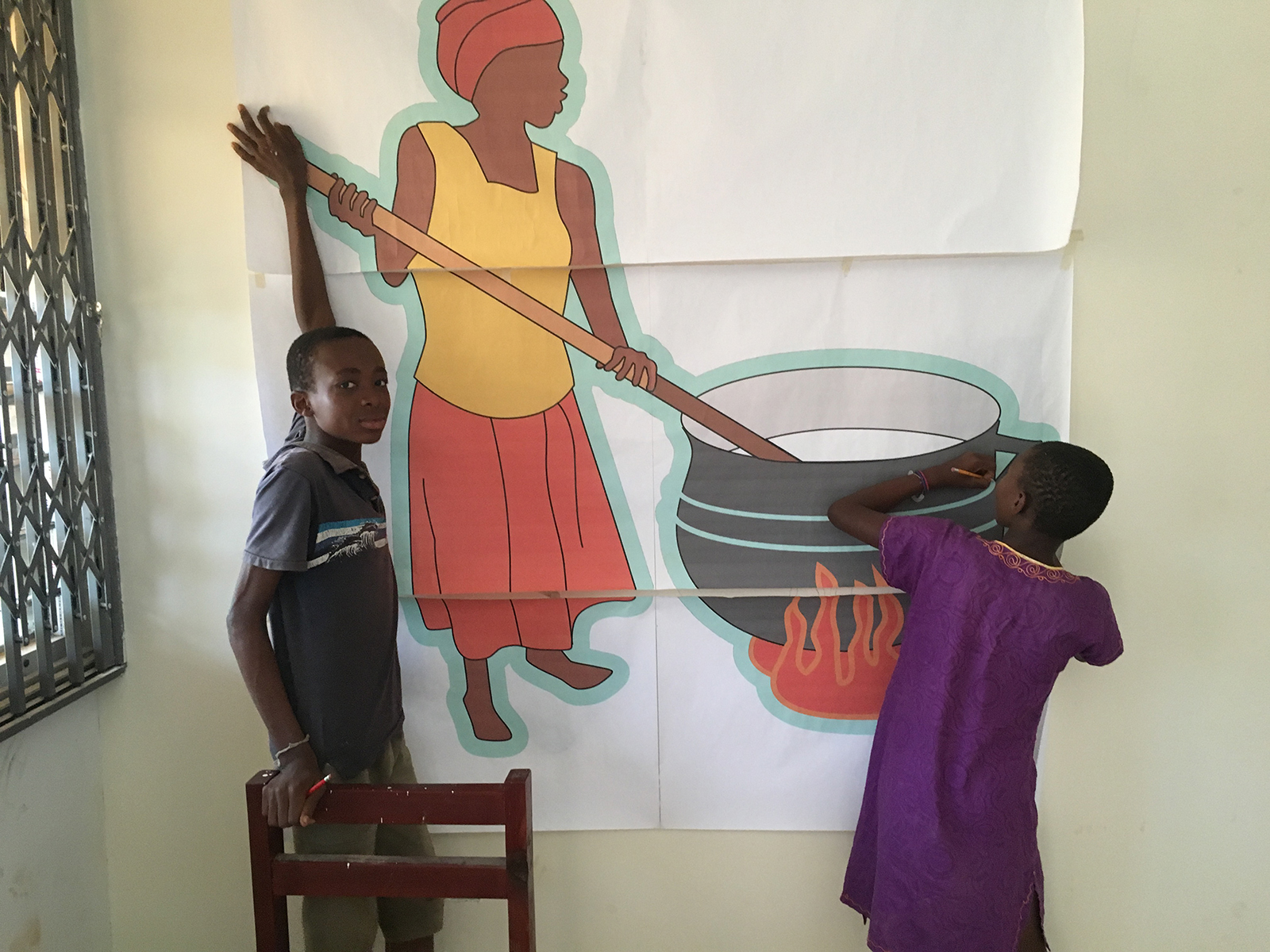 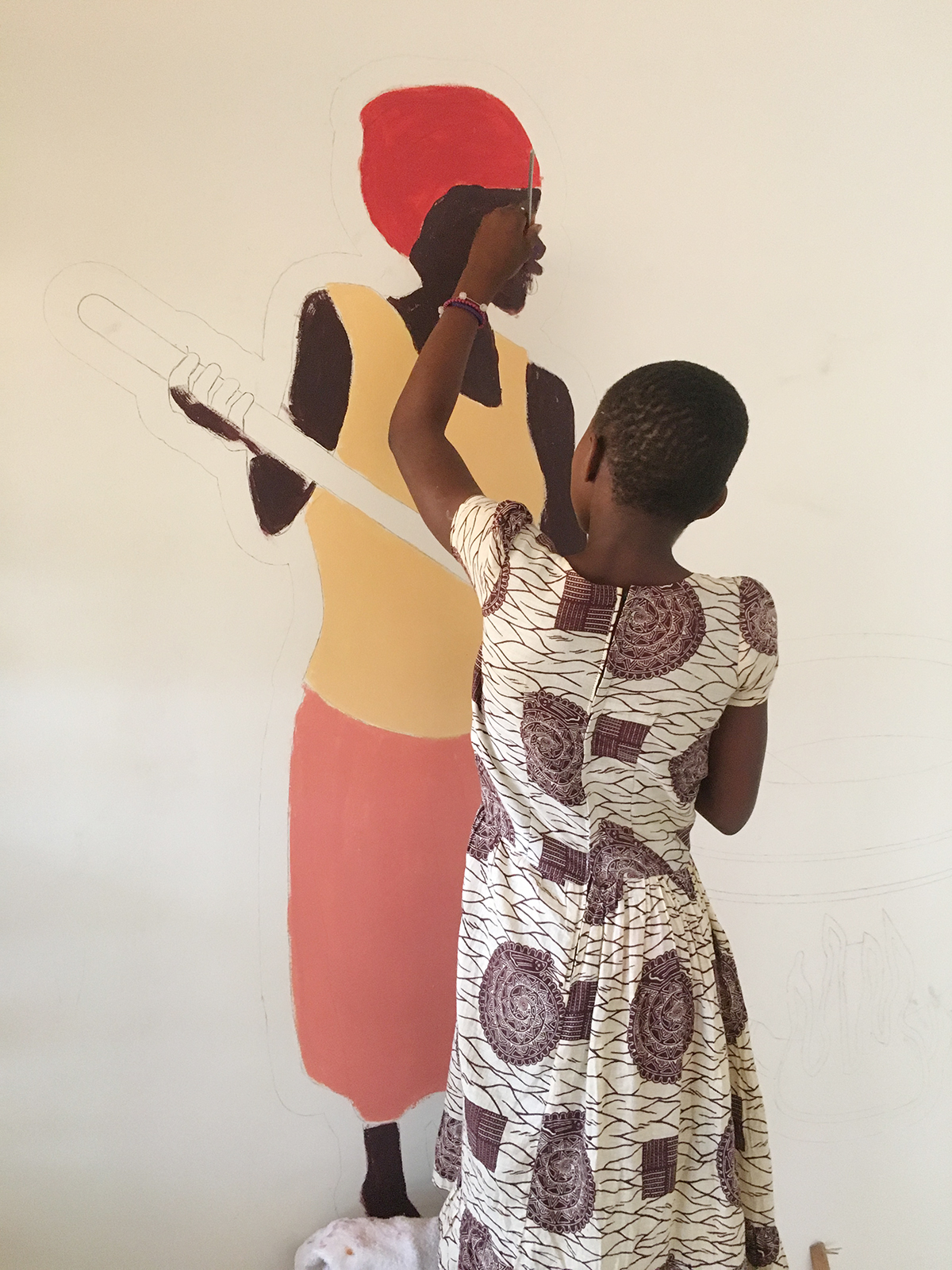 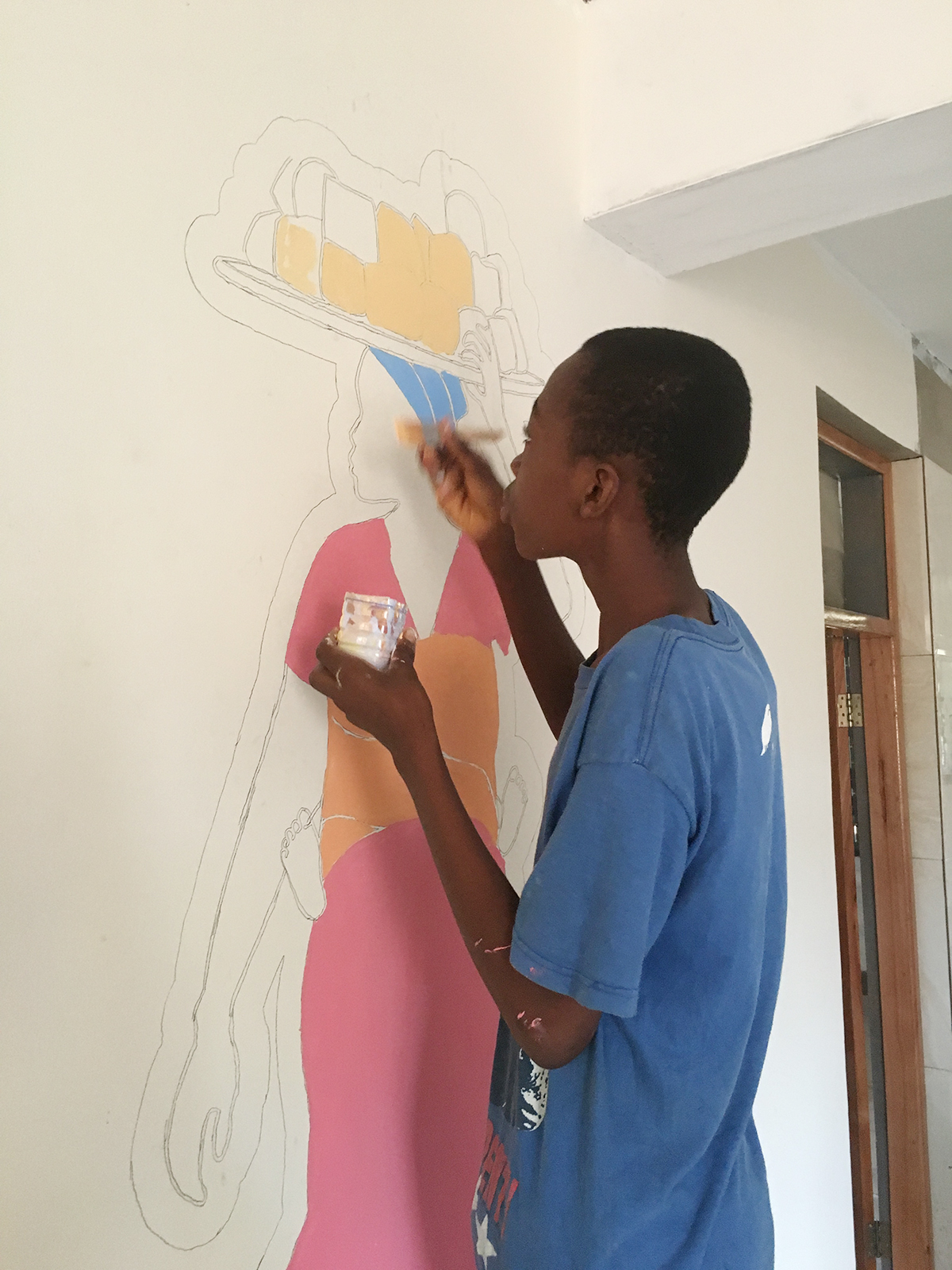 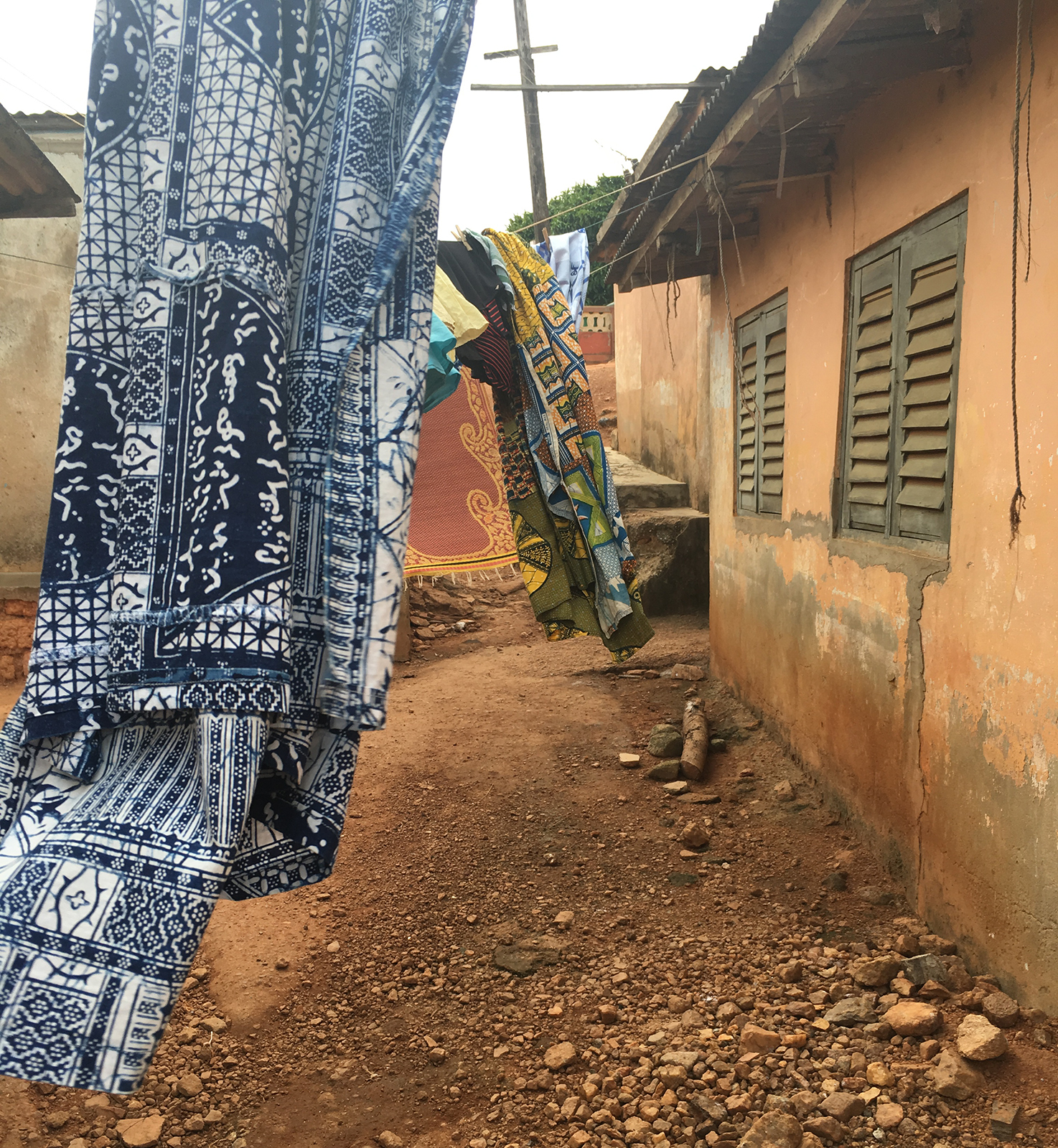 This was the Yale Alumni Service Corps’ fourth trip to Yamoransa, Ghana. The new ICTC building that they built was almost finished. My job was to paint murals in the library and in the home-ec rooms. For the home-ec room I drew two women symbolizing the production and marketing of kenkey, a Ghanian food made of fermented corn meal. (The last photo on this page shows Yamoransa.)

I did all the design work in the U.S. My ideas were presented to representatives of the community in Yamoransa. The two murals were approved. The home-ec mural was specifically requested by the community after they had approved the symbol-based design for the library. Yamoransa is known in this part of Ghana for its excellent kenkey. They thought it would be good to commemorate this activity. The kenkey cook is shown working the kenkey in a large aluminum pot, typical of local production. The woman on the right is off to market, often a substantial walk, her destination consisting of a roadside stand, as simple as a table, or as fancy as a small wooden shack with a roof. Where stop lights or toll booths exist, the women will walk in amongst the cars selling her product.

My design used only flat color, making it simpler to produce using an all-volunteer team. I used technology that did not need electricity, which the town has in short supply. I had made full-sized color printouts of the two women (courtesy of architects Ruggles Mabe Studio). They are cut into 26” strips to make it easier for the person tracing to duck their head and arms under while repositioning the carbon paper we used to trace. I set up a paint-mixing station made out of sawhorses pulled in from the construction site. We had a large water canteen with a spigot. A 5-gallon bucket was our sink. Water was obtained from a large cistern on the construction site. I mixed all the paints, using some of Ghana’s ubiquitous empty bottled-water bottles. This mural was painted largely by my two top volunteers among the children, in the last two days of work. I finished up the painting myself, including the black outline. While my volunteers did their work, I kept coming and going to and from the library, where the painting team work on the library’s mural.

This project was a bit easier than the library mural. It took 1.5 of my five days. My two top volunteers were the tracer/painters. They did a great job. There was a medical clinic being conducted in the room at the same time; they were not bothered and in fact joined in our discussions on the precise color for the ladies’ skin after one of my young volunteers pronounced the first mix too dark. It is wonderful that so much of the drawing and painting was done by Yamoransan children.

BOAKART SHOP
Some of my art will have buttons that take you to the Boakart Shop. If do not see a button you can request that the specific image be added to the Shop by sending me an email request with the title of the piece you want. I will be glad to place it in the Shop.