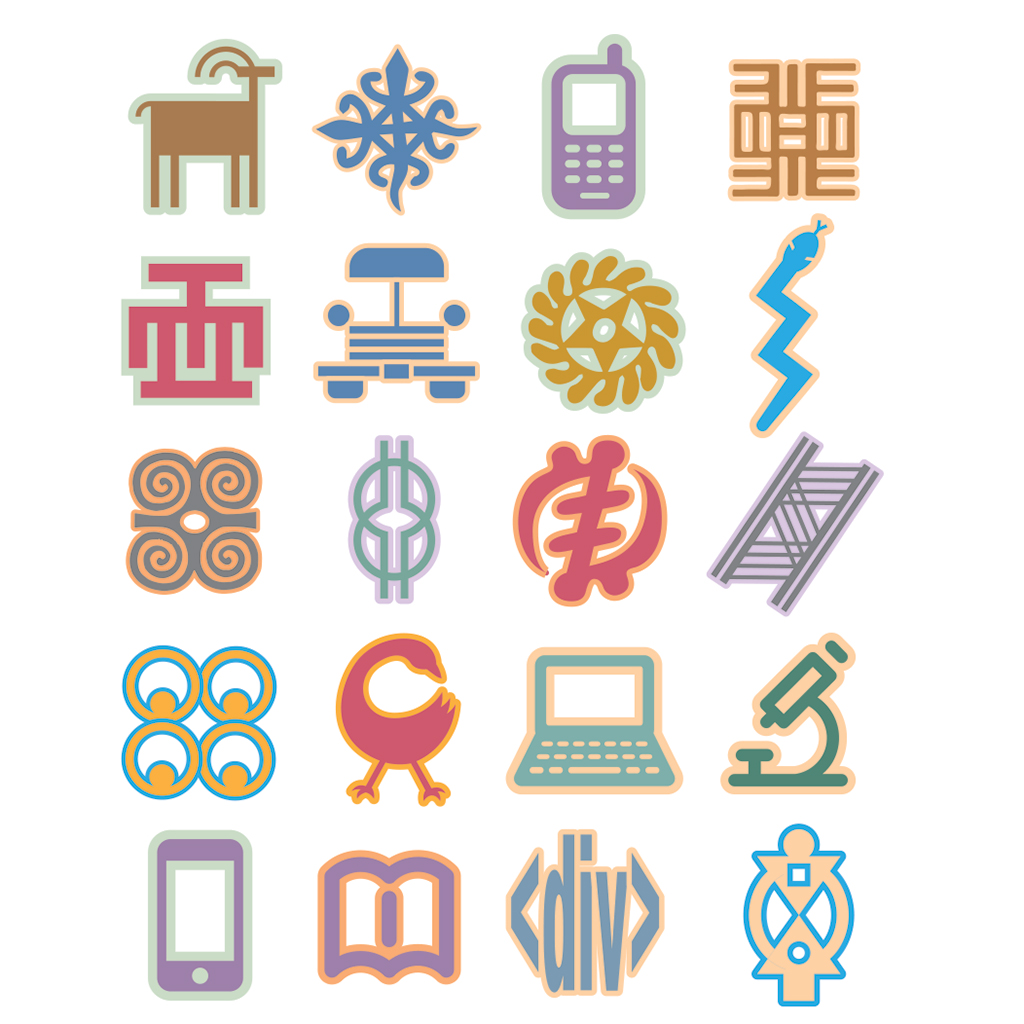 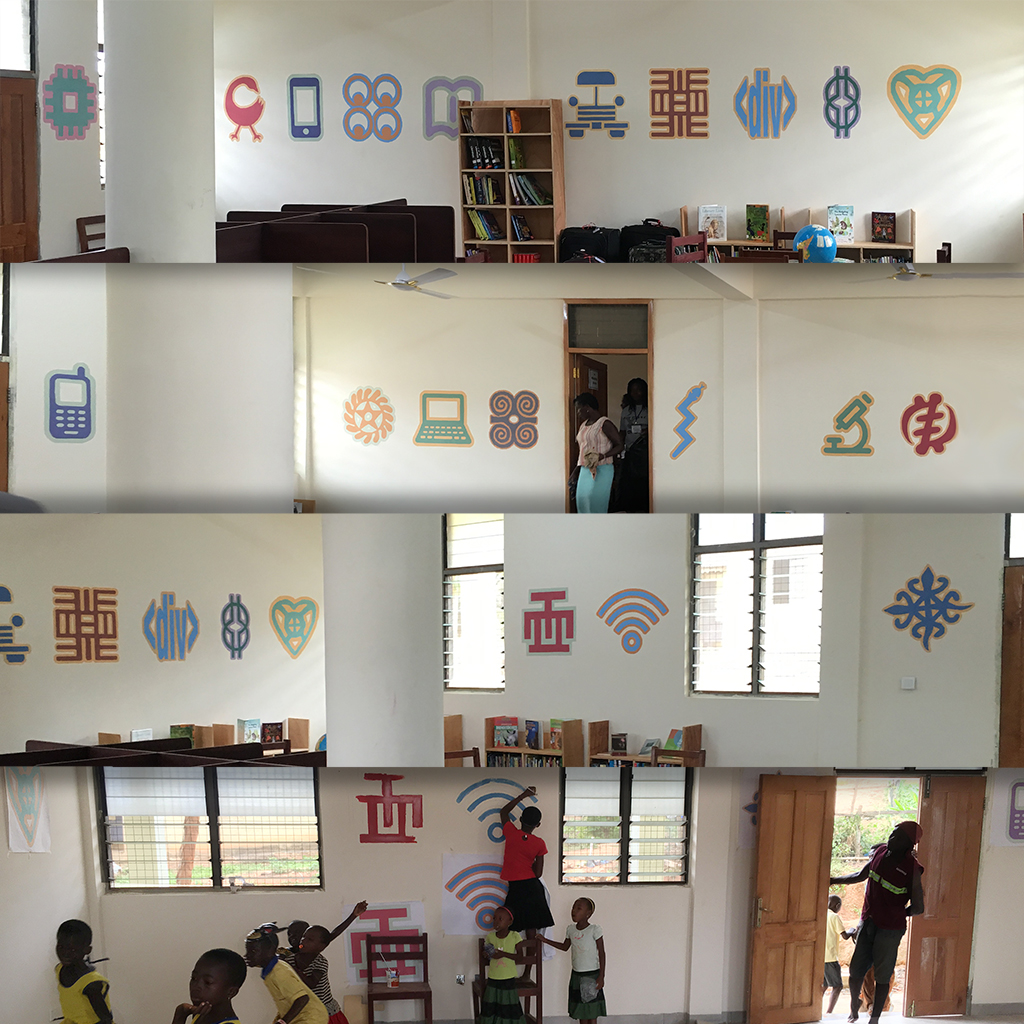 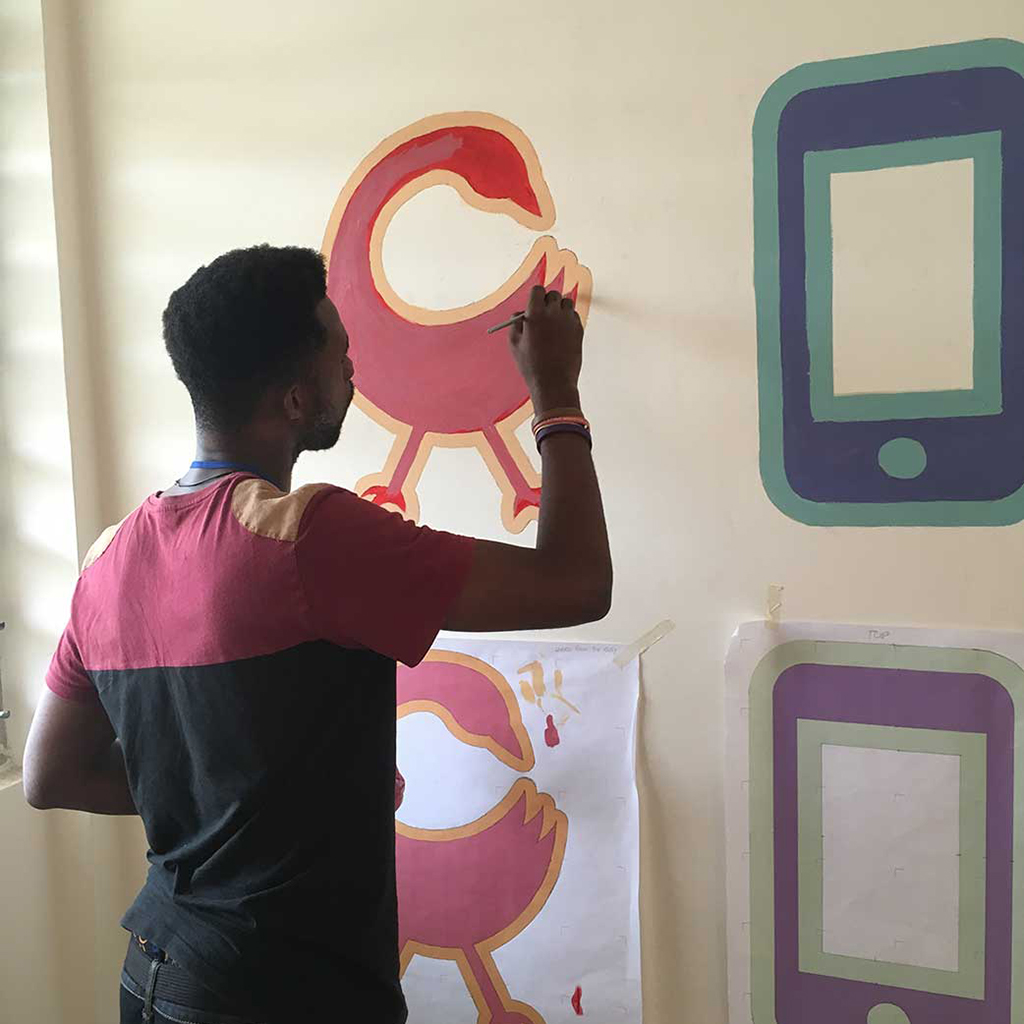 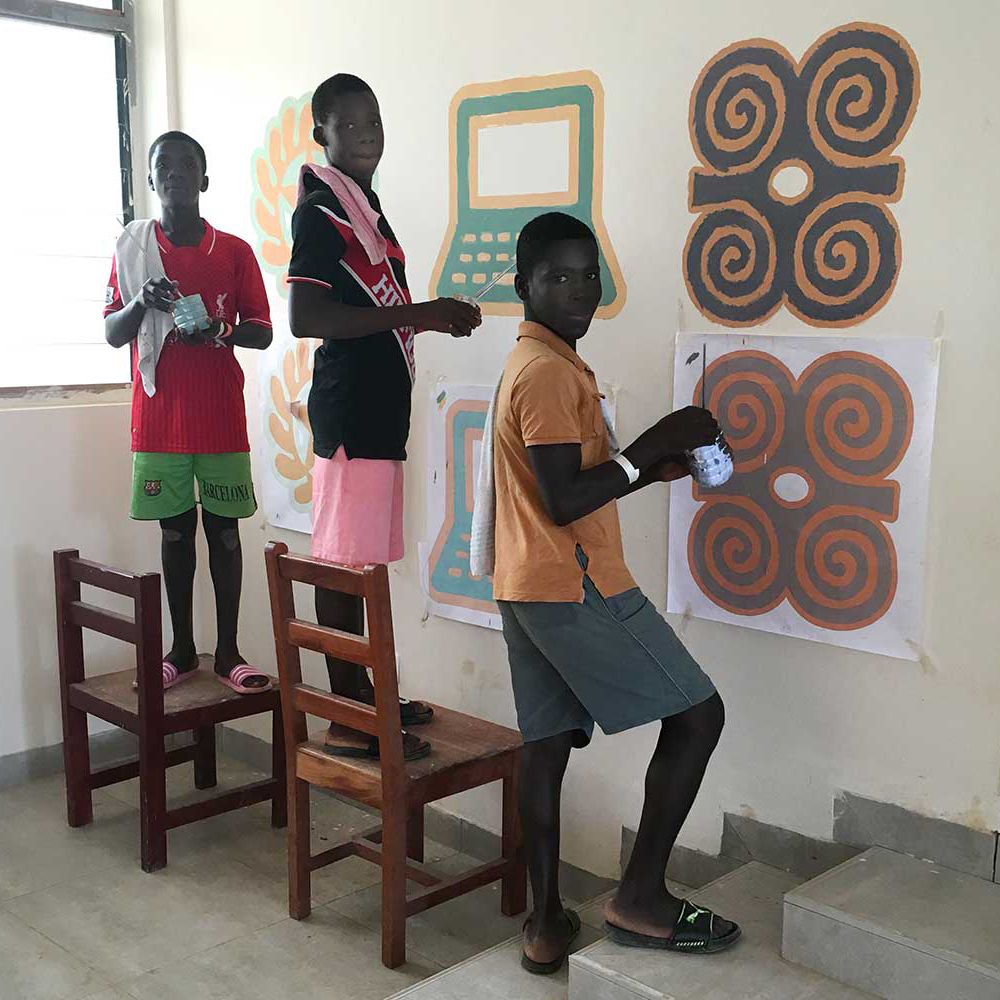 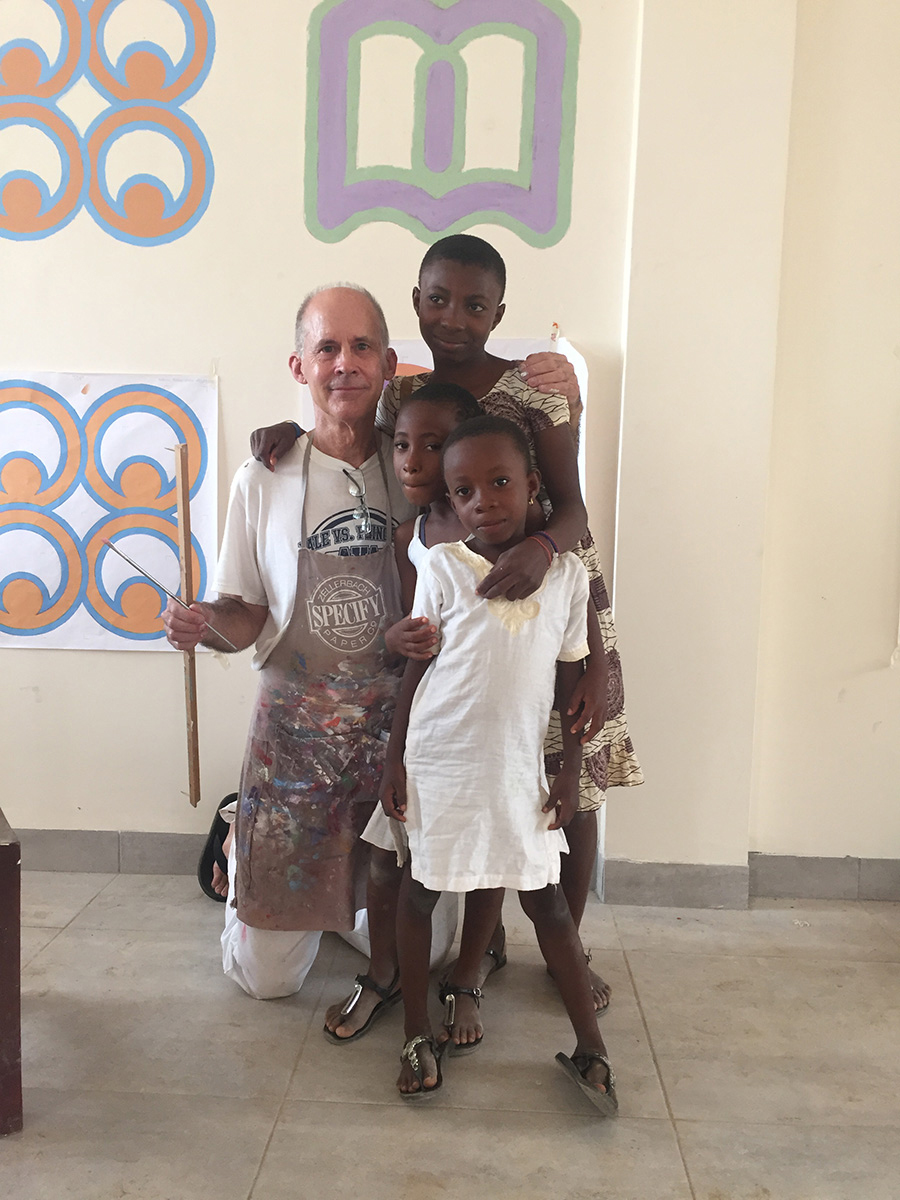 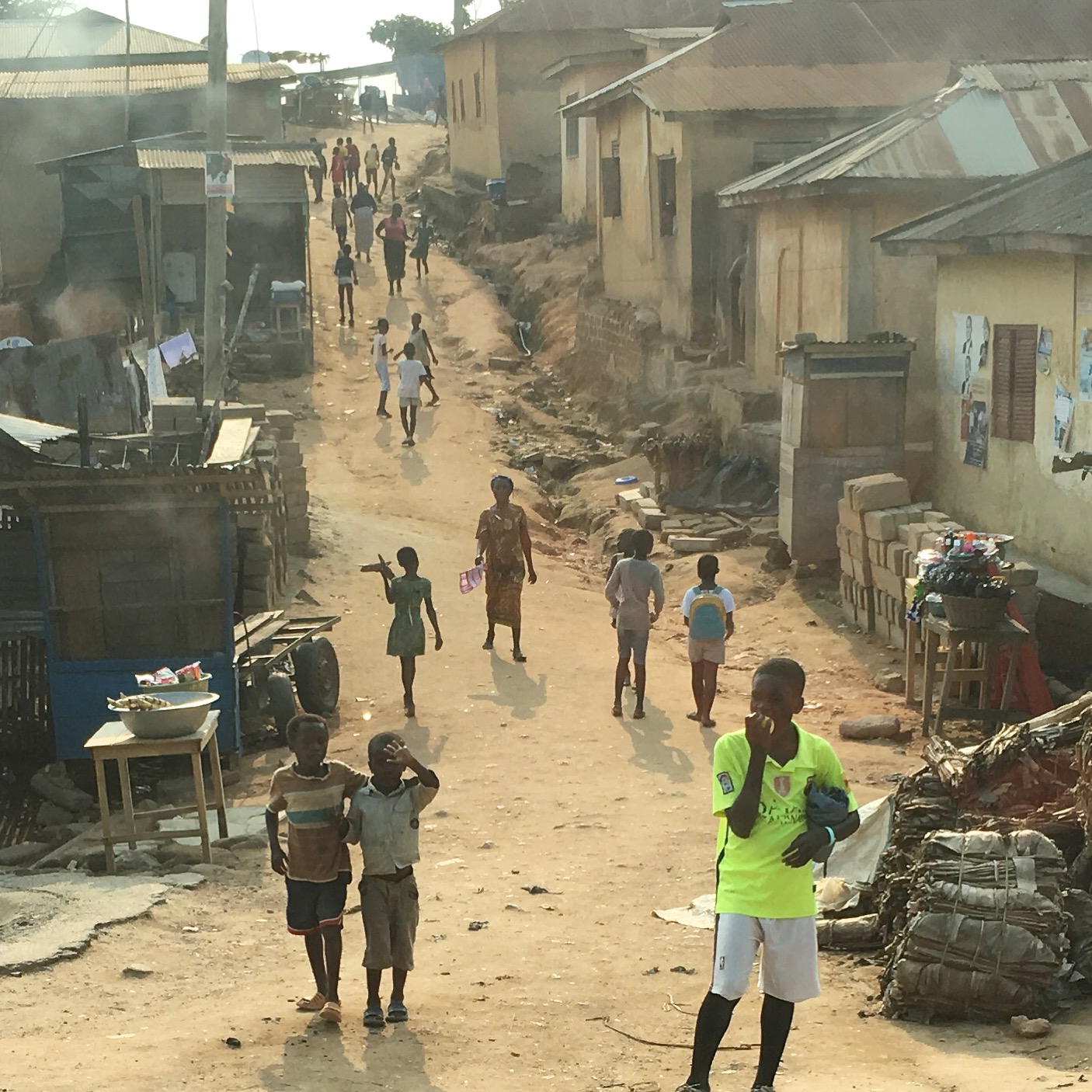 This was the Yale Alumni Service Corps’ fourth trip to Yamoransa, Ghana. The new ICTC building that they built was almost finished. My job was to paint murals in the library and in the home-ec room. For the library I designed a frieze of 24” symbols around the room on all four walls, adding up to more than 100’ of wall. Doors and windows on the north and south meant fewer glyphs on those walls. (The last photo on this page shows Yamoransa.)

I did all the design work in the U.S. My ideas were presented to representatives of the community in Yamoransa. The two murals were approved. The library mural integrates traditional Adinkra symbols with other symbols signifying both everyday life and also the information-tech mission of the new building. The  symbols are widely used in Ghana, symbolizing different elements of wisdom and collective knowledge.

My design used only flat color, making it simpler to produce using an all-volunteer team. I used technology that did not need electricity, which the town has in short supply. I had made full-sized color printouts of the 23 glyphs (courtesy of architects Ruggles Mabe Studio). They were traced using carbon paper. I set up a paint-mixing station made out of sawhorses pulled in front the construction site. I mixed all the paints for the team using the ubiquitous bottled-water bottles for containers. We had a large water canteen with a spigot. A 5-gallon bucket was our sink. Water was obtained from a large cistern on the construction site. I started drawing and painting with my three college-age AFS (American Field Service) volunteers. But the team grew as the children of Yamoransa found out what was going on and wanted to join in. I had a number of excellent volunteers and not enough tasks for the rest, so I assigned them tasks to keep the younger children from getting too active, to gather new gallons of water, and other tasks. It was chaotic at times. But it was difficult to ignore the enthusiasm of the children.

This project was a challenge because of various constraints. The first was time. I had to finish the two murals in five days. I bought myself an extra day of time by forgoing the Corps’ official lunch and eating energy bars. The second challenge was managing my painting team. Those who drew and painted were good, careful and meticulous. But it was hard having to thwart the ambitions of others. The reward was a job well-done that will bond the children of Yamoransa to the new building and its mission.

Images that are not square will have prices listed below the image.

Many of my images can be prepared in custom sizes and aspect ratios. Images can also be produced on paper or other substrates. Email me for prices.